Big congratulations to Super Ref James Clarke who joins the RFU Panel of Referees, from the whole Rugby4Heroes festival team. 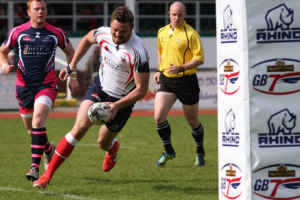 James, an experienced and well qualified senior rugby referee, has recently been elected to the RFU’s National Panel of  Referees. Whilst we don’t know what this involves in detail (apart from drinking tea and eating prawn sandwiches), we do know this is a prestigious appointment for a young and talented referee. We confidently predict that at this rate of progression, he will be refereeing the World Cup Final in 2019!

James has worked very hard over the least few years to recruit, organise and coordinate the Rugby4Heroes Festival referee team and structure the fixtures. The result of this hard work is a great standard of rugby, the tournament finishing on time, and lots of satisfied players and spectators. We are delighted he has received this recognition – couldn’t have happened to a nicer bloke!

The image above shows yellow shirted James in action at a Help for Heroes challenge match.